Secure your spot & get started today with our FREE EXCLUSIVE online offer!

By opting into the web form above you are providing consent for EDJ School of Jiu Jitsu to send you periodic text messages. Standard rates may apply. You can reply HELP at anytime or learn more. You may opt-out anytime by replying STOP.

We have been with EDJ for years now! Our boys love it and we couldn’t be happier that they have amazing role models who keep their minds and body’s healthy!

EDJ is an amazing dojo. My now 7 year old son loves his class. I decided to put my son in Jiu Jitsu last year to try and mellow him out. He is a very active boy. The behavior change that I saw with him in a small amount of time is truly amazing. Jiu jitsu not only teaches you self defense it teaches you self-discipline, self-esteem, self-confidence, self-control and how to be a better listener. If anyone is looking to join a dojo this is the one..the coaches and professor's are all great!! Thanks EDJ!

I have been training BJJ for 8 years and have trained with Gracie Barra, Checkmat, UFC Gym and have met many great instructors across them all. That being said, EDJ and Professor JP have really set the bar for me when it comes to training, instructors, facilities, and just about anything you can think of in a BJJ School. If you are in the Corona-Norco-Riverside area, please stop by and try a class, your time won't be wasted!

My daughter has been training with professor JP and coach Kim for 5 years in September. She has raised to the rank of yellow belt and is part of the schools competition team. They are great with kids small and older ones, the patience they have for each student is remarkable. The lessons in martial arts, life and often provide anti-bully classes is great. This place is our second home and we all consider ourselves as family. My daughter and our family loves EDJ. We highly recommend it we even have my little nieces training too.

Professor JP and his staff are amazing both on and off the mats.

The kids program is phenomenal. They truly care about the development of each student, and work to instill respect for the community while teaching valuable life lessons. Coach Kim is second to none in how she handles the program.

The adults classes are extremely fun and challenging. The academy has a wide range of skill levels from brand new white belts to multiple black belts.

The facility is always extremely clean and well maintained.

I would recommend this academy to anyone!

Request information today to learn more about our programs!

OUR SCHOOLS ARE FOR EVERYONE AND ANYONE WHO IS LOOKING TO LEARN SELF-DEFENSE, GET IN SHAPE AND IMPROVE THEIR QUALITY OF LIFE.

Our Competition Brazilian Jiu-Jitsu program can help you reach your athletics goals. Our school provides a positive environment for students with a great approach to personal excellence pursuit and realistic self-defense, however, we will always encourage and support any student who wishes to step up and compete. 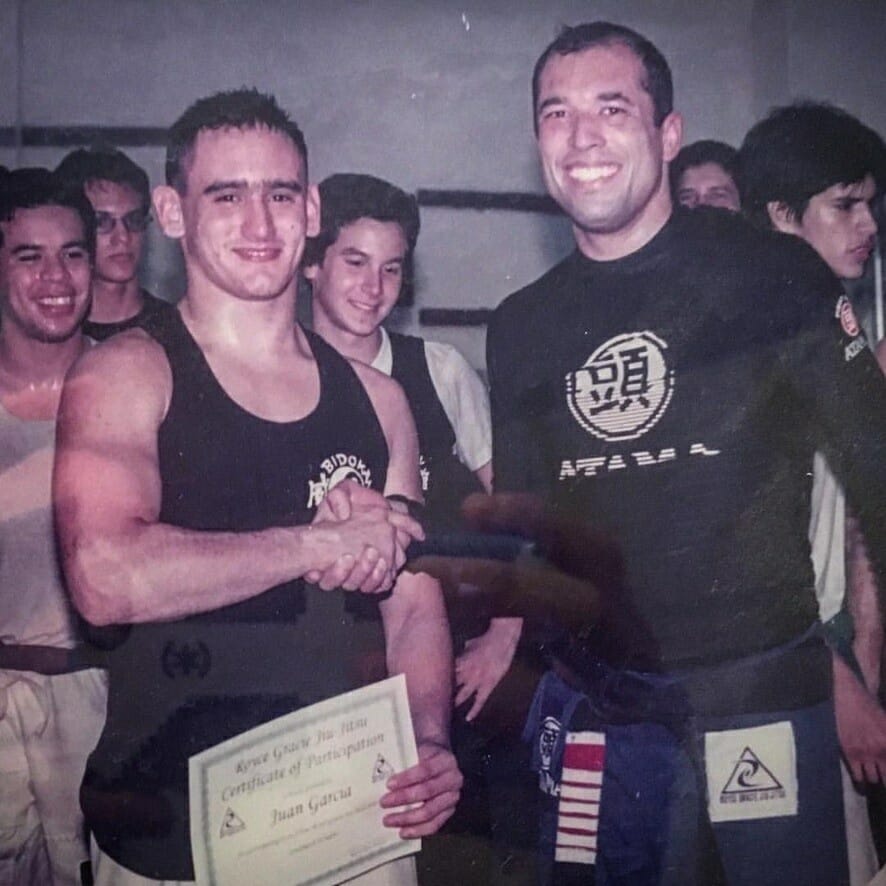 Juan Pablo García was born on the 26th of June, 1982 in La Spezia – Italy, when his father was stationed there for the Ecuadorian Navy. He was raised in Ecuador but also lived 2 years in Colombia as a child, which made JP learn self-defense from a very young age since kids bullied him for his different accent every time they move. 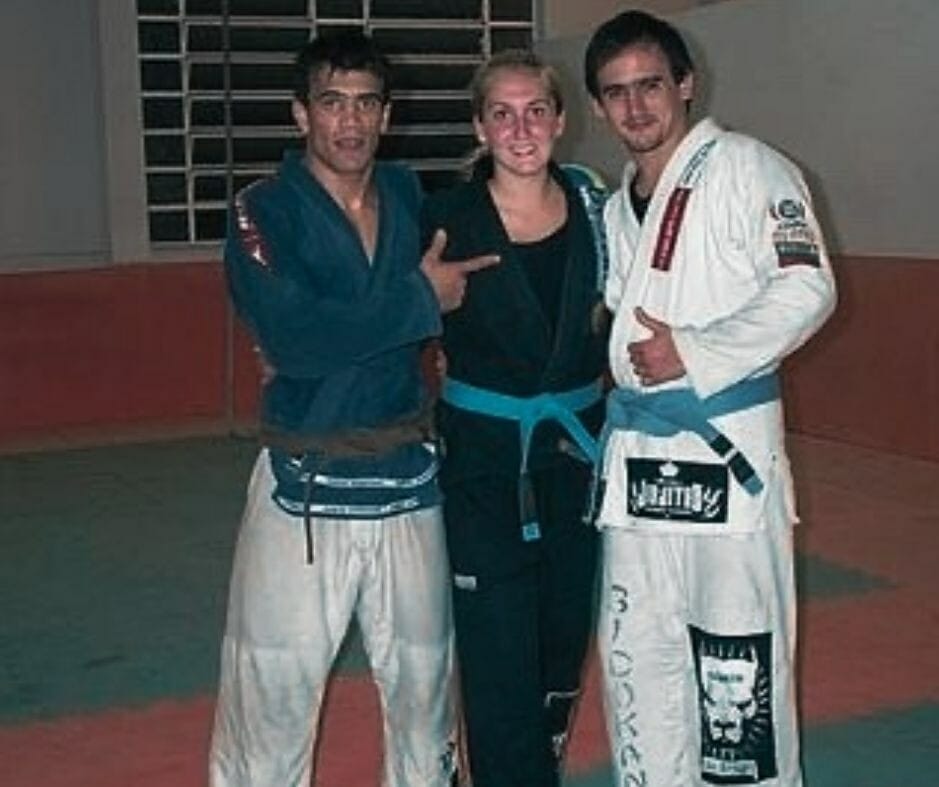 Juan Pablo started training jiu-jitsu in his early teens (14/15) Initially he trained Judo because he couldn’t find Jiu-Jitsu in his hometown. After training Judo for a year he join a Royce Gracie Jiu-Jitsu Network Affiliated MMA Academy in Ecuador, influenced by watching Royce Gracie on the first UFC.

He went through their belt system and participated in multiple local vale todo competitions and in 2003 got promoted to blue belt by Royce.

In his search to pursue more Jiu-Jitsu, he traveled to the US and Brazil for seminars and competitions. Since there were no BJJ Black Belts instructors in Ecuador, he would bring back what he learned to teach friends.

Always traveling and searching to learn and expand his Jiu-Jitsu he had the opportunity to train and spend some time with great instructors and Jiu-Jitsu practitioners like GrandMaster Helio Gracie, Fabio Gurgel, Marcio Simas, Cobrinha, Marcelo Garcia, Daniel De Lima, and many others in Brazil and the USA.

During that time he became Florida State NO GI champion, won multiple NAGA tournaments, and competed in Brazil and Argentina where he also spend time at the University of Palermo and training at the SUKATA academy.

He helped Found Gracie Barra and was responsible to introduce and establish various other Jiu-Jitsu Teams in Ecuador.

Juan Pablo was key for the development of BJJ in his hometown where he did the first Brazilian Jiu-Jitsu (gi and no-gi) competitions and bring many Black Belts instructors to teach the art, from here many other teams were created in Ecuador. 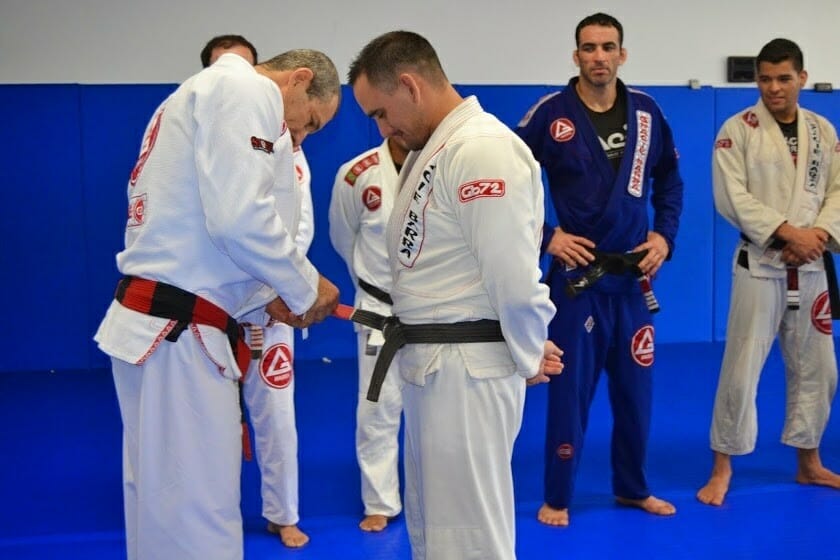 In 2008 Juan Pablo made the decision to join the Gracie Barra team and move to the USA permanently. JP competed and received his purple, brown, and black belt promotions under the Gracie Barra Association until the first degree on his black belt under Carlos Gracie Jr. in 2011

JP’s early days pursuing jiu-jitsu as a career meant sleeping at the gym, for some time on his car and barely earning enough to get by.

In 2014, he started teaching at Gracie Barra Santa Barbara for one year when he decided to move to Corona, CA, where he opened EDJ School Jiu-Jitsu former PTT Corona and made it his home. During this time Juan Pablo placed in many IBJJF tournaments and other federations been the IBJJF Long Beach Open Champion his last event. Having his own Academy was something he had worked his whole life for other than receiving his black belt. Currently, Juan Pablo Garcia teaches daily at his academy in Corona, also opened a school in Hemet, CA. and works closely with his affiliations in Germany, Chile, Ecuador, Nicaragua, Colombia, and the USA.

Traveling so much during his own Jiu-Jitsu Journey exposed him to many instructors, teaching methods, and styles. Professor JP has a deep love for Jiu Jitsu and says it changed his life in a positive way and brought him more focus and discipline.

Competing and traveling have helped him to face his fears, meet new people and help others have the positive change that Jiu-Jitsu brings to lives. He loves to teach, build up, and empower others to become instructors as well, courses on how to run Academies, equipping others with the tools they need to be successful and follow their dreams of opening their own schools. Since he didn’t have any guidance when he started, he is passionate about providing it for others.